Providing resources for people with a passion for Christ and the web
Home
Blog > Are You a Digital Native, Digital Immigrant, or Digital Refugee?

Are You a Digital Native, Digital Immigrant, or Digital Refugee? 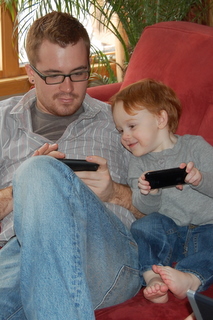 "It wasn't like this when I was growing up."

Times change - instead of a single phone wired to the wall, we each now have cell phones. Instead of walking over to the television to change the channel or adjust the antenna, we use remote controls and cable TV. Our cars can give us directions without us having to figure out how to fold the map back up again or which way is north. Instead of going to a movie theater or drive-in, we queue up movies on Netflix and Hulu to watch on multiple  devices. Instead of handwriting letters, we type out emails or tap out text messages.

The point in our life we get introduced to new technologies greatly impacts our reaction to them and our adoption of them, as does who introduces them to us and how. When is a phone not a phone? When it's a 'smart' phone in the hands of a digital native. When is a smart phone just a phone? In the hands of a digital refugee. It's not the technology, it's our view and use of technology.

Most descriptions you will find about digital natives and digital immigrants present these as generation gaps. These descriptions also see only 2 options - native or immigrant. If we focus on the dimension of 'choice' - natives have not exercised a choice, immigrants have. If we look at the dimension of 'origin' - immigrants have an origin other than their current, natives do not. From this, we have a 3rd group - those who have not exercised their choice nor have a place of origin different than their current. These are the digital refugees. I thought I was breaking new ground in this revelation, but a search for 'digital refugee' turns up over 23,000,000 results, some going back to 2006.

The generation that grew up playing Pong, Pac-Man, and Space Invaders decries the generation using Instagram, Twitter, and SnapChat.

Are we that much different? We are all part digital native, part digital immigrant and part digital refugee. Our dominant persona depends on the technology involved and when we encounter them and our chosen perspective. I am fluent in some technologies (a native), familiar with or learning others (an immigrant), and skeptical of some (a refugee).  We are they, just a bit older. It's not really our age, or the technology. It's about our adaptability, and our capability and willingness to learn.

We will be challenged by the next generations, just like we challenged the generations before us. Each generation has a unique opportunity and responsibility to those that follow. Technically-adept is not the same as technically-savvy. What they can teach you about the new technology, you can mentor them in the wisdom of how that technology impacts our character and our relationships.

After all, who invented the current technology?